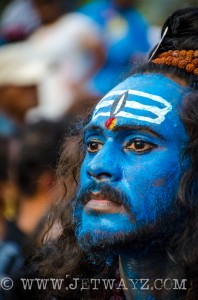 Thanks to Josie from Housesitting Travel for picking me as the winner of round 98 of Photo Travel Roulette. The theme was ‘Whats your angle’, and the winning picture was from foot level of one the many gulls that circle the shores of Essaouira, Morocco during one of the city’s nightly bright yellow sunsets. 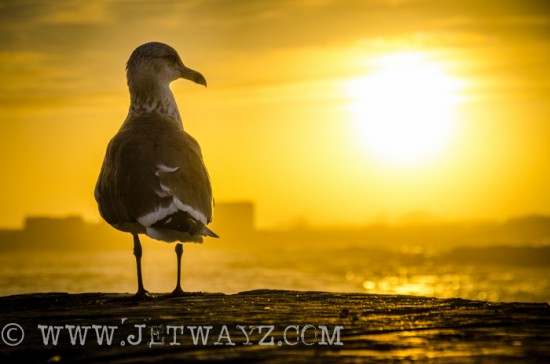 So it’s now my duty to start off the next round of Travel Photo Roulette and choose a theme. With Easter just behind us and a number of other religious festivals in the coming months, I thought it would be fun to see everyone’s best shots of religious practices. Something beautiful that you have come across on your travels from any religion in the world. So Round 99’s theme is ‘Spiritual Beauty’.

Show me your best shot of a religious festival, a Church, Temple, Mosque, or any other religious building. Or… if you aren’t that in touch with your spiritual side show me a photo of a place so beautiful that it made you question your existence or made the world feel huge.

The contest will be open for entries until Monday April 13th 8am EST. The winner will be announced shortly after.

How to Enter Travel Photo Roulette #99

Leave a comment below with a link to your picture (either from your WordPress content upload or a Flickr account or similar) along with a description of what the picture is about and what makes it Spiritual Beautiful! Winners will be chosen based on their ability to show me the beauty of a spiritual event from your travels with a single photo. The Winner will be announced shortly after the contest closes on April 13th. 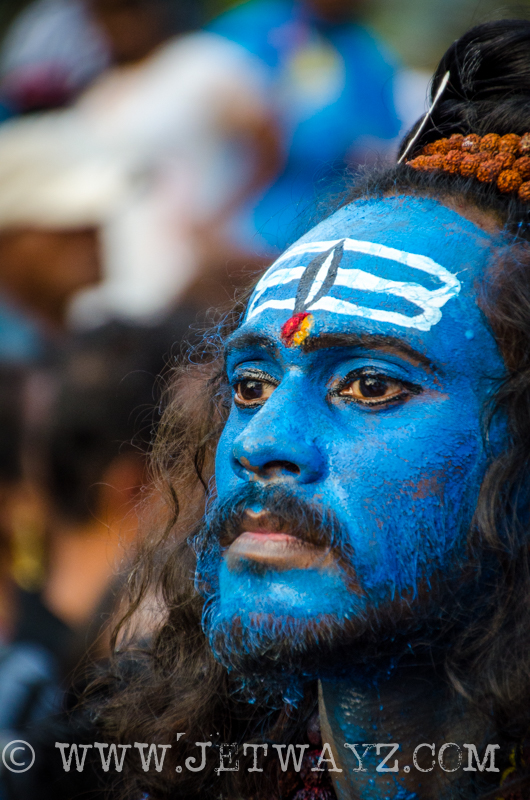 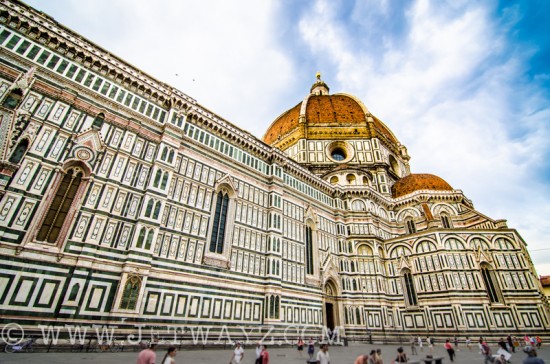 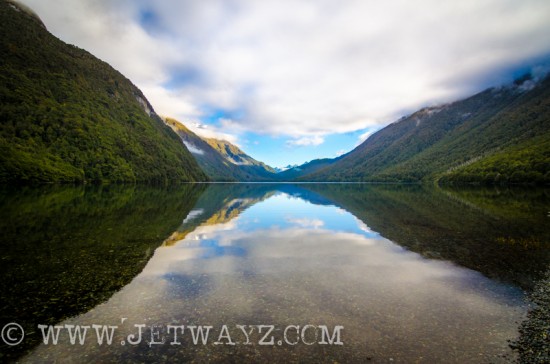 The contest rotates through travel/photography blogs, so the winner of the previous round of Travel Photo Roulette hosts the subsequent round on their own blog. The new host then chooses the next theme (a generic keyword or phrase) and bloggers submit their interpretations of the theme over the course of the week of the contest.

At the end of the week, the hosting blogger chooses their favorite photo from the submissions and displays it as the week’s winning entry. They then include direction to the new host for the next round. Readers can attempt to sway the author into picking a certain photo via comments, but the author can ignore comments as they see fit. The game is repeated with the winner hosting the following week’s game and choosing a phrase for new photo submissions.

And here is the list of the previous 98 contests. What an amazing bunch of pics there! 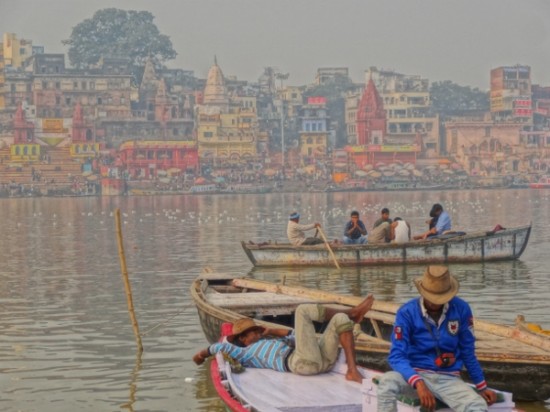 “One of my favorite photos comes from the Holy Ganges of India. Locals and travelers alike come to this river for the spiritual benefits, but for rowers who take those on pilgrimage over to the opposing river banks, it is just business as usual.” 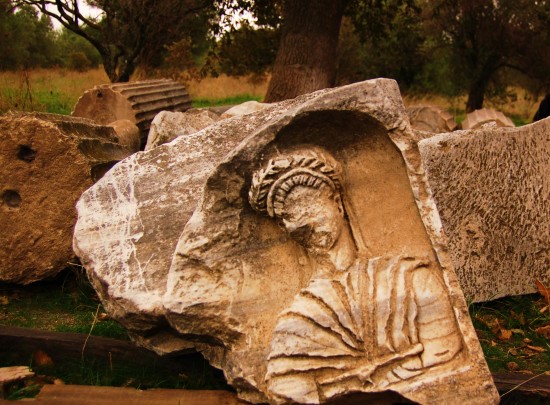 “An ancient carved stone from the ruins in Troy, Turkey. Whenever I’m in the presence of long-ago craftsmanship and art, I feel the spirits of the hands that created it. I love to place my hand on the stones and know other ancestral hands touched the same spot.” 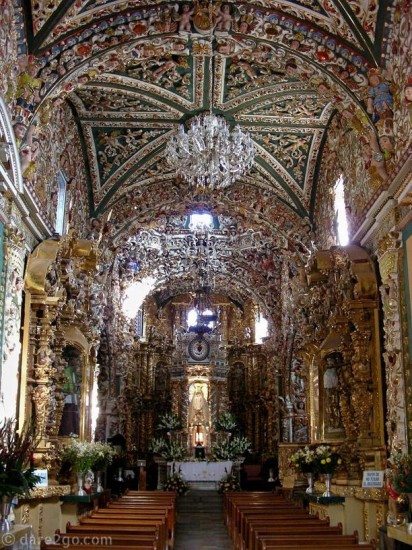 “My submission for this round is possibly overwhelming the senses… Everywhere you look you find something new to discover in the small “Church of Santa María Tonantzintla”, found in the town of Cholula, outside Puebla in Mexico. It is an indigenous church, all decorated by indigenous artists. Construction started in the 17th century and was finally finished in the 20th century. Every surface in this small church is covered with colourful or gilded stucco work, often depicting scenes from the native Nahuatl beliefs of the Aztec. Even its name “Tonantzintla” is derived from an old Aztec goddess.
[I don’t know if it falls under ‘beauty’ to the western eye, but it is certainly very unique and surprising.]” 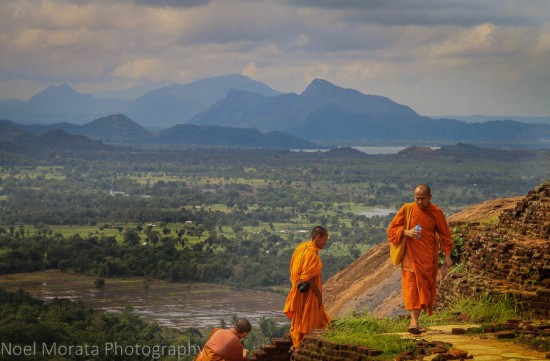 “I submitting a post and photographs of a trip I took to Sri Lanka recently (7th photograph from the top of the post) with the three monks climbing Siguriya in the Central Hills of Sri Lanka is the spiritual Buddhist center of the island and stunning in landscape and people. Here is the post and image that you can use for the picture.” 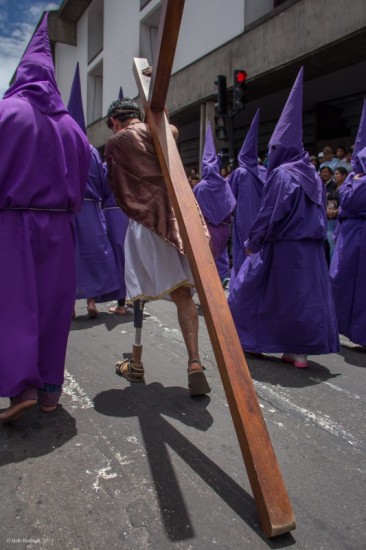 “Taken last weekend during the annual Good Friday Procession in Quito, Ecuador, one of the largest such Roman Catholic events in Latin America. It’s of a man with an artificial leg carrying a large cross during the procession.” 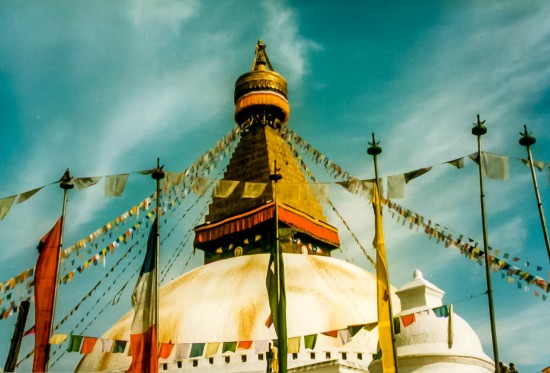 “In the late 1990s, I went to live in Nepal for a year. I arrived shortly after the Maoist insurgency erupted into a full scale civil war. My days were spent studying, my afternoons spent dodging military checkpoints and breaking curfew. On the weekends, I would visit the Boudhanath Stupa for prayers and meditation. Looking back on that period, it was the most spiritual time in my life. Now, nearly 20 years later, I often reflect back on that time.”

Entry #7 Carole from Travels With Carole 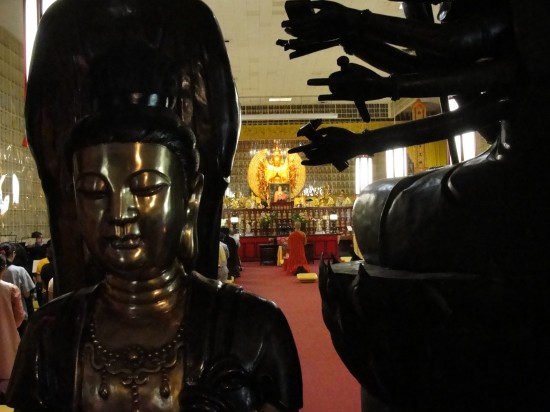 “You don’t always need to leave your own area in order to find an amazing spiritual spot. Sagely City of Ten Thousand Buddhas is just up the highway from me in Ukiah, California. It is one of the first Buddhist temples and monasteries built in the U.S., it operates on the grounds of a former state mental hospital. The temple (in the former gymnasium) has walls lined with perhaps 10,000 golden Buddha figurines in various sizes, and good-timing presents the opportunity to witness chanting.”

Entry #8 Brittany at The Trading Travelers 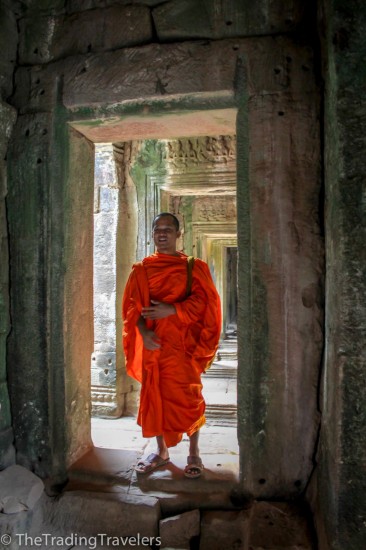 “My photo for “Spiritual Beauty” was taken at Prasat Bayon temple in the Angkor Archaelogical Park. It is one of my favorite photos and memories from our time at Angkor. We were enjoying a few peaceful moments away from the crowds as we were exploring the maze-like galleries when we happened upon a Monk who seemed to be doing the same. We shared just a brief moment together but it is one that we will remember the rest of our lives.”

Entry #9  Suzanne at The Travel Bunny 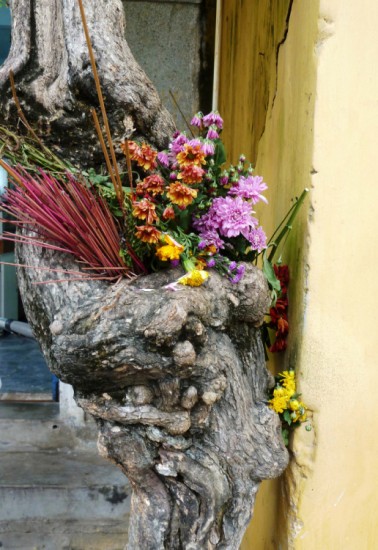 “Vietnamese people leave offerings and prayers for their deceased ancestors at little shrines which you’ll find in shops and restaurants or by the door of a shop. We found this one wedged into a gnarled tree and filled with chrysanthemums and incense sticks in Hoi An, Vietnam.”

Entry #10 Brandon at The Yoga Nomads 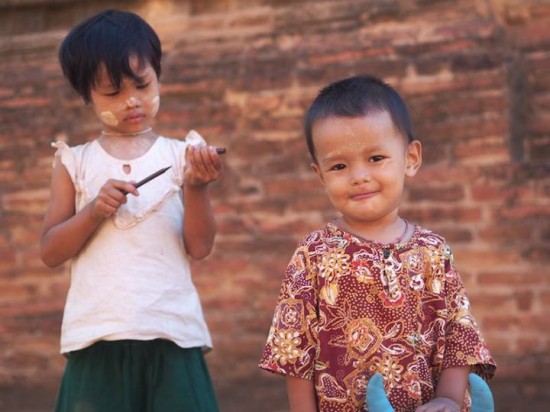 “Kids are full of wonder and born without judgement. Maybe we can learn something from them? We met these two cuties outside a small temple in Bagan, Myanmar. We played with them for a few hours and left excited about life.” 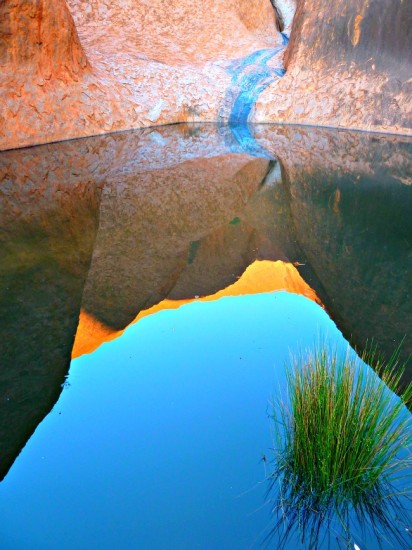 “After Minyma Kuniya defeated Wati Liru, her spirit combined with her nephew’s and together became Wanampi (water snake). Wanampi lives here today and has the power to control the source of this precious water” Traditional Owner – Anangu (prounounced: arn-ung-oo) people, Uluru, Central Australia 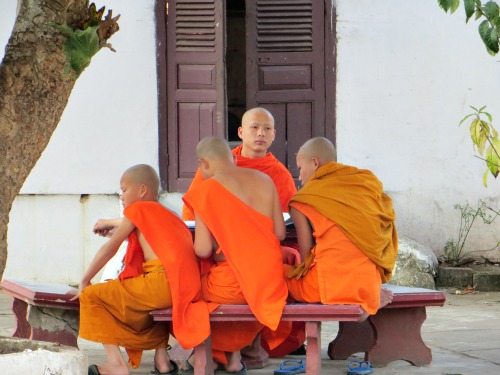 “My photo was taken at a Buddhist monastery in Luang Prabang, Laos. We came upon these student monks resting between classes and meditation sessions in the courtyard. In Laos, many men study Buddhism at a monastery for at least some period of their lives. We learned that poor families are more likely to deliver their young sons to the monks for training because it is the only way they can receive more than a rudimentary education. One of the students in the photo appears to be quite young. In Luang Prabang, one often sees monks and students in their distinctive garb in the streets and each morning they receive alms of rice from the townspeople.”